Primary Water is why we don’t
have a water shortage.
WATER IS A RENEWABLE!

A recent study documented the presence of vast quantities of water locked far beneath the earth’s surface. That study confirmed “that there is a very, very large amount of water that’s trapped in a really distinct layer in the deep Earth… approaching the sort of mass of water that’s present in all the world’s ocean”

What is Primary Water? 1985 Interview with Dr. Stephan Riess

WATER – Facts YOU Need to Know About Primary Water . . .
The practice of accessing primary water has been around for centuries. What early Greek philosophers like Aristotle and the Italian Leonardo DaVinci believed, and enlightened scientists working at well-known universities today are exploring, is that all water is created in the mantle of the earth and is available in limitless quantities, worldwide.
Drilling for primary water looks similar to drilling for ground water. The main difference in accessing primary water is that it requires drilling into a geologic fissure or fault to release the primary water that has risen near the surface.
Locating well sites for primary water requires special training and experience. There are countless primary water wells that have been functioning for decades all over California and around the world.
Primary water advantages:
• Provides excellent quality, clean, unspoiled water
• Is fresh and not subject to pollution or surface radiation
• Is created under pressure, so that it comes near the surface by itself, incurring less pumping costs
• Never dries up
• Unlike groundwater, is not subject to the effects of drought
• Does not cause subsidence like some groundwater wells
• Refills depleted groundwater supplies from below in some instances
• Is plentiful and replenishable
• Water can be localized to meet the water needs of individual communities
• Horizontal drilling rigs can benefit fish and wildlife by refilling dried up streams and lakes. Primary water was used to refill dried up lakes such as Lake Elsinore (which went dry in the 1950s).
• Primary water wells can now be used to supplement existing water transport systems like the California aqueduct
Some history of Primary Water
In the 1960’s, the late Dr. Stephen Riess, a geologist and mining engineer, introduced the California government to the concept of primary water. He proposed a water delivery plan which included drilling 8,000 primary water wells along the foothills of the western slope of the Sierra Nevada Mountains. The State government at the time was geared toward managing only atmospheric water, so the Riess proposal was ignored and the California Aqueduct was built instead.
Had Riess’ plan been endorsed, the output of these primary water wells, at a conservative average of 270 gallons per minute, would be producing more than 3,100,000,000 gallons of water per day (8,000 x 270 x 60 x 24), 365 days a year.
If a scaled down version of Riess’s plan utilizing primary water wells was in place today, the problem of water outages in many of the central valley towns in California who have now run out, would never have happened. If the technology of drilling for primary water had not been repressed for decades by the California government (and other governments worldwide), plenty of fresh water would be flowing for farming, wildlife and people regardless of multi-year droughts.
Look for an illustration showing both the primary and atmospheric water cycles, a free E-Book entitled New Water for a Thirsty World, and technical scientific papers available on the Primary Water Institute’s website at www.primarywaterinstitute.org.
The mission of the Primary Water Institute is to train individuals to locate and drill for primary water in California and around the globe. Please support Pal Pauer and the Primary Water Institute if you can. 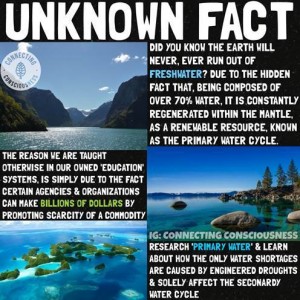 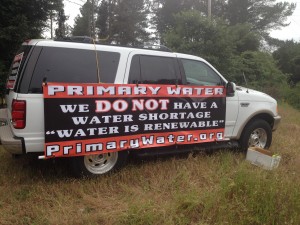 The illustration shown and explained in the youtube below was made solely by the Primary Water Institute, the pioneers in Primary Water Information.  For more information goto PrimaryWaterInstitute.org

PRIMARY WATER –
WHY WE DON’T HAVE A WATER SHORTAGE!
Half Page Double Sided Flyer – FREE DOWNLOAD

Excerpts from link below
The Primary Water Institute – More Scientific Evidence “Water is a RENEWABLE” = the Earth makes water deep within and WE CAN “EASILY” ACCESS IT . . . READ MORE – LEARN MORE – we have been tricked by the powers that be into thinking water is scarce and we are running out . . We have not been told the TRUTH . . . The Earth makes water continually, within . . .

“A NEW PERSPECTIVE ON SOURCE OF THE POST-NAPA QUAKE WATER”
September 26, 2014
As Solano County enjoys an incredible new flow of water in local creeks after the recent Napa earthquake, experts are speculating what might be the source of this “bonus from nature” LINK . Officials report that at least 200,000 gallons of water per day are flowing from Wild Horse Creek, with many other areas reporting similar phenomena. Water quality tests performed by local public works officials confirm that the new water is pure enough to drink. This new water is being added to municipal drinking water supplies…a great blessing to local residents.
Although federal government geologists report that the new flow of water is likely “shallow groundwater” suddenly released from opening of fractures, other theories exist that offer great hope for a thirsty world.

Collected and burned by those who didn’t want you to find out the truth!
Primary water, the original source of our oceans, is still being created by geological forces. That water, usually in a potable form, comes to the earth’s surface in thousands of places, some well known like Jericho and Bahrain where it has provided drinking water for thousands of people for thousands of years. It pours into deep mines all over the world. Hundreds of houses on the rocky shores of Maine get their fresh water from wells drilled into the shoreline granite. Copenhagen gets all its water from a few wells. In Northern Europe, water that can be tapped by wells that do not depend on aquifers is called “ground water”. The hallmark of new, or primary, water springs and wells is that they provide water at constant temperature and flow.

But this world-wide source of “new water” has been ignored by geologists and laymen in most countries including the United States. They were taught that all potable water comes from the “hydrological cycle” which merely recycles water already on the surface of our earth.

Michael H. Salzman, an engineer and administrator, researched, wrote and published a book providing detailed information on “new water”. As published in 1960, it can be read and/or downloaded from this website. It is not readily available in libraries.

Mike handed us one of his last copies in 1970 and asked us to see if we could get some recognition for it. He told us some wealthy people wanting to get approval for funds to build an aqueduct to bring water from the Colorado River to southern California (they succeeded) had bought up and burned all the copies they could find. They also tried (and failed) to have him fired as Director of the Los Angeles Housing Authority.

Massive Ocean Discovered Towards The Earths Core!
A reservoir of water three times the volume of all the oceans has been discovered deep beneath the Earth’s surface. The finding may explain where Earth’s seas came from, and lend some interesting evidence to the hollow earth theory.

The water is hidden inside a blue rock called ringwoodite that lies 700 kilometres underground in the mantle, the layer of hot rock between Earth’s surface and its core. The huge size of the reservoir throws new light on the origin of Earth’s water. Many geologists think water arrived in comets as they struck the planet, but the new discovery supports an alternative idea that the oceans gradually oozed out of the interior of the early Earth.

“It’s good evidence the Earth’s water came from within,” says Steven Jacobsen of Northwestern University in Evanston, Illinois. The hidden water could also act as a buffer for the oceans on the surface, explaining why they have stayed the same size for millions of years.

Earth’s Conveyor Belts Trap Oceans of Water . .
Water, water, everywhere, even deep inside the Earth. That’s the outcome of collisions between the planet’s grinding tectonic plates, according to a new study.

Primary Water:  Inner Earth May Hold More Water Than the Seas . . . National Geographic – 2002
A Waveless Waterworld-Earth’s oceans make up just 0.02 percent of the planet’s total mass. This means the vast lower mantle could contain many times more water than floats on the planet’s surface.

The Japanese experiments don’t guarantee that that’s the case, of course, because the researchers haven’t actually measured the mantle. No one is ever likely to get a direct sample of material from the fiery mantle itself. But by simulating mantle-like conditions in the lab, Murakami and his colleagues have demonstrated that a water-rich inner Earth is plausible.

Other research has suggested that a zone between the mantle and the crust also contain a great deal of water, the Japanese researchers noted. If so, there could be more than ten times the amount of water inside the planet as there is on its surface.

Sixteen Things Libya Will Never See Again
NOTE: Gaddafi carried out the world’s largest irrigation project, known as the Great Manmade River project, to make water readily available throughout the desert country. While drilling for oil they discovered Primary Water which is a renewable and continual process within the Earth. Primary water is an alternative to atmospheric water and is accessible as a water source, globally. We were not told the facts of how water is created by hydrogen and oxygen and is plentiful.

“The wars of the 21st century will be fought over water”.

Remember, the Earth is the water planet and makes water continuously. We have an abundance of water and are being tricked into a false belief system to make money from our ignorance and lack of understanding how the water cycle really works and where water originates. . . The international bankers and other corporate agencies make HUGH profits from our willingness to believe false science. . .

Please share the TRUTH with all you know and contact ALL ranchers and farmers and warn them what The Report From Iron Mountain told us “the biggest land theft in the United States and Global history is underway” . . .

PRIMARY WATER in Las Vegas – an aquifer with 21 million acre-feet of water – LA Times 2005
Golden Ridge’s analysis shows that part of its property is suitable only for a golf course because of flooding. But the company can develop the rest if it can tap into the massive “carbonate aquifer” that stretches from western Utah through Nevada and into California, Bradley said.

“There’s an aquifer with 21 million acre-feet of water 4,500 feet below us,” Bradley said. He plans to spend $100,000 to drill a 3,500-foot test well by the end of August, he said. An acre-foot of water is enough to supply two average households for a year.

Greg James, former Inyo County Water Department director, said he thought developers would eventually find the deep aquifer beneath Pahrump Valley. “There will probably be enough water to meet their needs,” he said. “The question is, what is the cost environmentally?”

James, now a consultant for the Nature Conservancy, which owns property in the area, said the deep aquifer could supply water for the hot springs in nearby Tecopa. It’s also a potential source for the Amargosa River and for springs in Death Valley National Park, which has a southeast boundary just 20 miles from Charleston View.